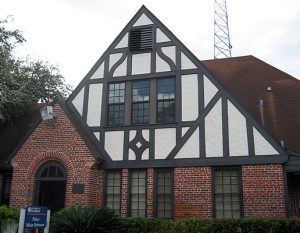 WRUF, chartered in the 1920’s as the Voice of the University of Florida, was one of the country’s most powerful college radio stations. Famed sportscaster Red Barber began his career by broadcasting UF sports events for this station. The Tudor Revival studio was a variation from the brick Collegiate Gothic that remains in harmony with the campus and appropriate to the small scale of the building. In the 1950’s WRUF moved to new quarters, and the building has since then been the headquarters of the University Police Department.