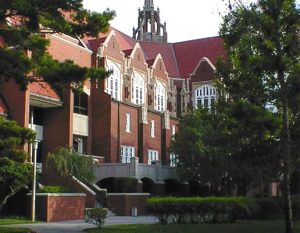 The University Auditorium is the centerpiece of the UF Campus. The landmark designed by William Edwards has impressive Gothic windows, a 99 rank organ with approximately 6,500 pipes, and a vaulted timber ceiling with gargoyle busts at the ends of hammerbeam trusses representing academic, professional, and athletic pursuits. Behind the historic finishes are steel roof trusses and reinforced concrete structure. For many years assemblies and commencement ceremonies were held here, and audiences still enjoy musical and dramatic performances. An administrative tower had been planned for the University Auditorium facing the Plaza of the Americas, but only the Auditorium wing was completed with a temporary wood stair facing the Plaza. The project was set aside when the Florida Land Boom crashed in 1927 and was finally abandoned in 1951 when Tigert Hall was built to respond to the dramatic growth of the Post-World War II student body. The Century Tower was erected in 1953. In 1977 the Auditorium was restored and a new North wing provided a compatible architectural completion of the building. The wing designed by Architect Jim McGinley won the Governor’s Award in 1977.