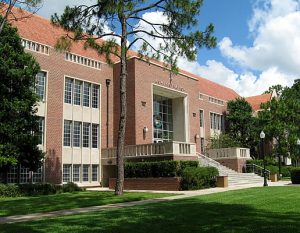 Completed in 1951, Tigert Hall launched a new era in campus architecture that was both progressive and compatible with its Collegiate Gothic context. An administrative tower and wings had been a part of the original design of the University Auditorium, but financial constraints set that project aside. In response to the enrollment explosion after World War II, a new seat for the university’s administration was urgent. The Jacksonville firm of Kemp, Bunch, and Jackson was selected to complete the project in association with University Architect Guy Fulton and his assistant Jefferson M. Hamilton. The reinterpreted Collegiate Gothic integrated traditional brick and tile with simplified cast trim in the comparatively massive reinforced concrete structure. The University Seal in the bold grid tower entrance and the plaques representing the University’s colleges identify Tigert Hall as the seat of the University Administration. Planned under the administration of University President John James Tigert, the building commemorates him in its name.