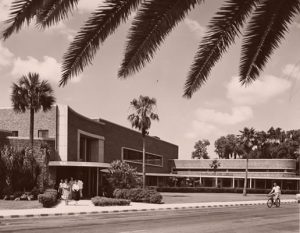 The HUB Student Services Center was designed by the Russell T. Pancoast and Associates of Miami and dedicated on November 3, 1950. The project architect was Andrew Ferendino (later a principal of the important firm of Spillis and Candela). Jefferson M. Hamilton was consulting architect for the University with Guy C. Fulton as Architect for the State Board of Control. The Student Services Center was renamed the Hub by students after a campus-wide contest on the occasion of its opening. The Hub, built in 1949-50, reflects the influence of international modern architecture significant to the post-World War II era. This new building at the outer edge of the historic center made a gesture to the future while remaining in harmony with the scale and materials of the campus, as directed by University Architect Guy Fulton.