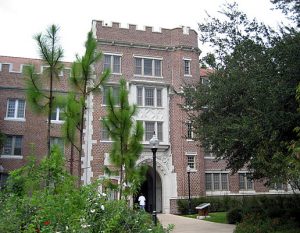 Sledd Hall, designed by University Architect Rudolph Weaver, was built in 1929 and links to Fletcher and Thomas Halls. Sculptural figures along the cornice depict the all male student population of the period engaged in a variety of activities. Plaques with seals of great universities of the world suggested the University’s goals for academic achievement. Courtyard entrances to the individual suites are enhanced with figures representing creatures from the sea and the local region. A sculptural frieze depicts the Spanish discovery of Florida and reflects the Spanish heritage of the state. Another sculptural relief depicts students with architectural tools and sporting equipment. An outstanding feature of the building was the Mucozo Tower South entrance to the dormitory courtyard. The sculptural features recognize the friendship of Chief Mucozo and Spanish explorer Juan Ortiz. The tower also included a trunk depository, where students’ luggage was loaded on a dumb waiter to the storage level below. Sledd Hall was named for the first UF president, Dr. Andrew Sledd.