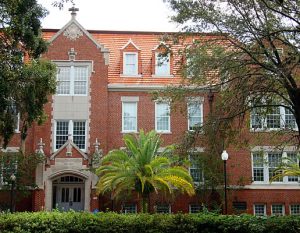 A major gift of $40,000 from the George Peabody Foundation helped complete the first College for Teachers in 1913. The College of Education moved to new quarters in Norman Hall in 1934. Once the site for printing the Florida Alligator newspaper, Peabody Hall was renovated in 1990 as part of the Criser Student Services Center by VOA Architects of Orlando. At the focal point of the courtyard framed by Peabody, Criser Hall, and the Library is a sculpture depicting President Albert Murphree, 2nd President of UF, created in 1946 by Paul Manship, sculptor of the Prometheus at Rockefeller Center.