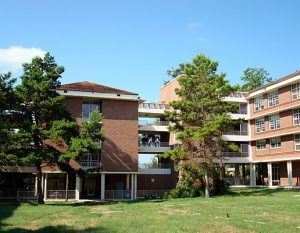 The first permanent women dormitories were completed in 1950 to accommodate the newly coeducational university. The dorms were named for Angela Mallory, Nancy Y. Yulee, and Mary Margaret Reid, wives of notable government figures of Florida. The Board of Control in 1947 had assigned the Assistant Business Manager to tour progressive university and develop recommendations for the dormitories. Female students attending the University at that time could enjoy the amenities of Mallory, Yulee, and Reid Halls, which included sewing rooms, hairdressing rooms and separate dining facilities from the men on campus. The three units were combined to allow common facilities such as kitchen and offices. In order to save time and money, C and R Construction used tilt-up poured concrete walls.

Beyond the early campus, the brick walls and clay tile hip roofs establish continuity, while providing features suitable to the Florida climate and the latest standards of university housing. Concrete overhangs above the windows serve as permanent awnings. A wide fascia below the eaves and modified classical West portico deliver a prelude to post-modern detailing. The dormitories of this period were the design of Guy Fulton. He worked to maintain quality in the face of time pressures, and compatibility with the campus through detailed specification of the brick and roofing tile to match the roofs of existing buildings.

Architect: Guy Fulton
Building Name: Angela Mallory (1815-1901), wife of U.S. Senator from Florida, Stephen R. Mallory
Nancy Wickliff Yulee (1826-1885), wife of U. S. Senator D. L. Yulee, who built a railroad from the Atlantic Ocean to the Gulf of Mexico, the first rail service to Gainesville
Mary Martha Reid (1812-1894), who, during the U. S. Civil War, established a hospital in Richmond, Virginia to care for the sick and wounded from the Florida regiments