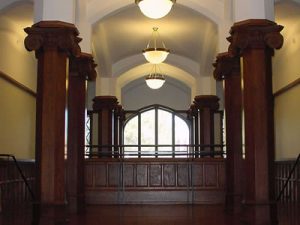 Science Hall was completed in 1910, the new home of the departments of botany, chemistry, horticulture, physics, zoology, and bacteriology. The University Museum, which became the Florida State Museum in 1914, occupied the second floor. The building was later named for Dr. Edward R. Flint, who served as the first University Physician, as well as professor of chemistry. The building was rehabilitated and the auditorium wing was added in 2002 through the support of the Keene family; the project by Rowe Architects included restoration of the University Avenue entrance and the grand stair lobby.

Center of block and at ends of the rectangular mass