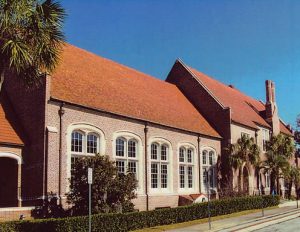 The Florida Union, the present south wing of Dauer Hall, was completed in 1936. The funding drive was spearheaded by orator William Jennings Bryan, cousin of Board of Control Chair Nathan Bryan, with major contributions from the YMCA. The Union served as student center for the boys from Old Florida until completion of the Hub in 1950. Significant features include a Tudor chimney and bay window with universal and Florida regional symbols in stained glass, completed in 1938 by D’Ascengo Studios of Philadelphia. The Keene Faculty Center in the west wing now hosts small lectures and provides a reading room for faculty. Adjacent to this wing was the 1922 Johnson Hall Commons and Rathskeller, destroyed by fire in 1987.